Orange music is a duo composed by Martin Virgili (researcher, composer and guitarist) and Pamela Guruciaga (theoretical physicist), interested mainly in the exploration of new forms of artistic creation from the interaction of body, sound, space and scene.

Its repertoire includes vocal works of sound and experimental poetry, contemporary and avant-garde music, theater and musical theater, which articulate with works of its own that are rooted in the performance and exploratory tradition of body, music and word.

2. About the program
By Martín Virgili

I have just turned 40 years old. I have spent more than half of my life interested in music and the various forms of creation (artistic or not). One of the big questions that accompanies me remains: «how do we have an idea?» For a long time it was Nietzsche who replied: «A thought comes when he wants not when I want,» although later I understood that one could To favor the conditions for that arrival and therefore to stimulate the arrival of that thought. That is, training, exercise, meditation, various psychoactive substances, suggestions, hypnosis, a good dream, etc. Would offer a differentiated framework for that thought (idea) to be present.

Some years ago I found a ceremonial design from the native peoples (Dakotas, Lakotas) of North America. This design is known as «Vision Search» and consists of spending four nights isolated under a tree, in total fast and without speaking. I am in the middle of that road (after four days, one has to stay in the mountain seven days, then nine and finally thirteen) and I have been transformed by that experience, as has my relationship with art and creation. This situation, naturally, has not cleared doubts on the initial question, but on the contrary, it has deepened much more its hidden condition.

The Visions: Esoteric Recitations program, which I prepared with my partner Pamela Guruciaga, explores different ways of approaching creation from what we consider to be «occult» or «esoteric». For me, these ways have become cardinal, at least in my eventual creative present.

This program does not intend to answer that fundamental question: how do we have an idea? Rather it is the question the one that unfolds in the five pieces that compose it. These are:

Visions (2016) arises from the encounter with a series of astrologers and fortune tellers whom I consulted about how a piece built from what they «saw» in me would be. Concrete materials, actions and literature were collected from the meetings I had with them.

Hyperventilation (2017) reports a procedure to alter the states of consciousness of the interpreters. I am interested in recording how the materials and structural aspects of the piece self-organize as the interpreters are being freed by a particular type of breathing that cooperates with that purpose.

Chile (2011) describes (almost in the manner of an intimate diary) «something» of my four nights on the mountain in Kitralma, Chile, when I started my Vision Search.

Vocal-a (2013) works the relationship of the physical gesture as a way of expressing an inner state. Yoga calls these gestures «mudras», and the oriental disciplines like Tai-chi or Chi Kung use these gestures-movements as vehicles of our inner forces.

Finally, an exploration. It is a piece composed of two materials united by a strange serenity. On the one hand, the action ha ha ha ha ha, nee nee nee nee nee (1968) by Joseph Beuys – which consists in repeating this phrase «yes yes yes yes yes, no no no no no» for a required time – and on the other, the textual and musical ostinato of Rockaby (1980) by Samuel Beckett. These two pieces work as a Western mantra: they are two pieces united by just being, a rocking of the discourse, not with enlightened fulfillment as a goal, but only that, being, rocking.

* Premiere for the tour 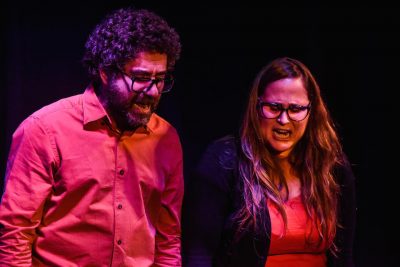