“The work of art is the greatest enigma of all,
but the human being is the solution.”

The works gathered in the following program describe a history of sound and words,
a different history, which draws on everything that is outside music but which nevertheless sounds, and on the word when it no longer means almost anything.

The history of sound poetry and action music is a history of “in between”. It is a field of exploration in which sound, gesture and word make their material and symbolic conditions pass through, producing new artistic forms of that exchange. From this interaction arises, as a new political force, a freedom, an expansion in the creative field, which music and poetry lack if they only feed on their own production and dreams. In this new freedom, which has time as its unifying program, every sound presence is poetic and every poetic act (even if it doesn’t sound) is sound.

Ding (2016) and A love story (2016) are two pieces based on pre-existing graphic material. The starting point of Ding is the work “Double sound” (1966) by Argentine Luis Pazos, and A love story feeds on the work “Una historia de amor” (1968) by Mirella Bentivoglio. These works, framed in the territory of visual poetry, serve as a backdrop for a sound re-production of a visual source. But not in the manner of a score, which attempts to indicate reading orders or models, but rather like a film script, in which not only a scenic, visual and sound plan is detailed, but also a state of the plastic situation.

Vi tu cara, y sentí vertigo y lloré(2011) Rodolfo Acosta, simultaneously with Lavoro (1965) Giuseppe Chiari form a dramatic unit of chained actions. Acosta’s piece, composed for an improviser, dialogues with Chiari’s proposal as they both respond to a teleological program of actions; somehowthey both ask us to order things. Chiari’s work has a single instruction: “Around the interpreter there are various things placed in total disorder. They order them neatly. They follows their own idea of what “well ordered’ means”. Acosta’s piece, in contrast, offers the interpreter an established order (a strict plan of actions), but not that (the material) that needs to be ordered.

Vocal-a (2013) is a music written for two actors. It works on the production conditions of the human voice in relation

to the (personal) identity that it calls for. n this sense, the composition questions itself about “the sound of our voice” in a curve that goes from the material andcontingent conditions that produce it to the symbolic and social representations added to itsuso. What kind of particular identity travels in the human voice, in each partial voice? In another direction,Vocal-afunctions as a dramatic musical poem, organized under the conceptual tension that boredom and danger produce.

Découpe (2006) by Vincent Barras and Jacques Demierre is a work of sound poetry that takes as starting material different words that name the parts of the human body. These body-words will gradually move away from the language until only a sound remains of them, barely a remainder of speech. The piece works, precisely, with those remains.

The diptych formed by Ja ja ja ja ja, nee nee nee nee nee (1968) Joseph Beuys and Rockaby (1980) Samuel Beckett, is another experimentation by coupling. Beuys’ work is a sound action whose only material is contained entirely in its title. He repeats five ja (sí) and five nee (no). A western mantra. Beckett’s piece also describes a cycle of repetitive and pendulum squares. Both the actress and her text sway on the surface of language. Little moves, little changes. The secret is in the coupling of these two spirals, in the dialogue that opens between these two forms of repetition.

The concert finishes with ABC of sound (1965) Bob Cobbing, emblematic piece of sound poetry of the twentieth century. Cobbing’s idea is to present a sound alphabet made up of a thicket of languages, which seeks to highlight all the underground paths that link the various territories of speech. 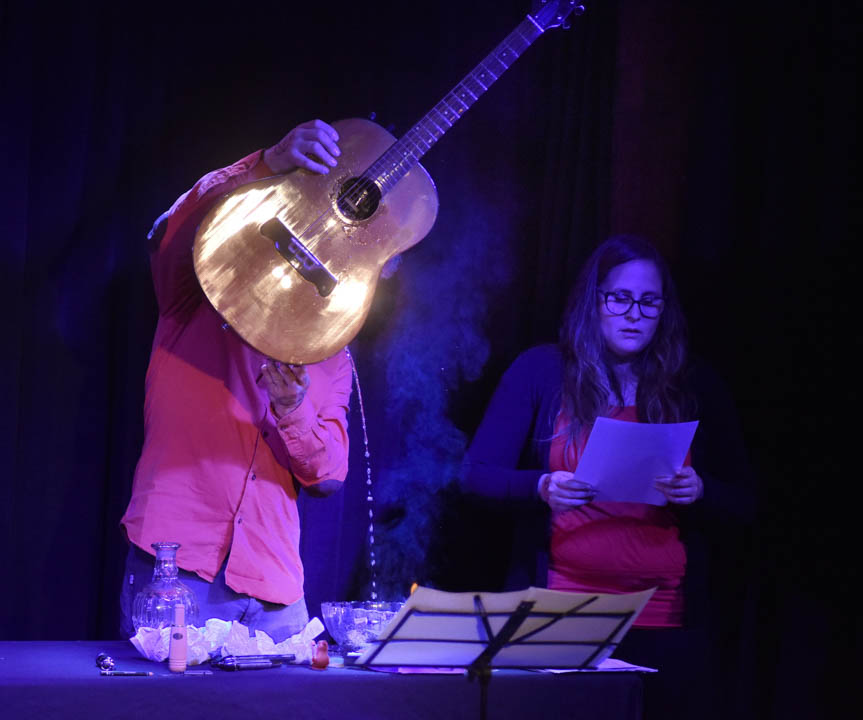